Tel: (058)42890
This May 2nd Alzheimer’s Tea Day will celebrate 25 years of supporting the 55,000 people living with dementia in Ireland. Come along to the Visitor Centre for a Tea Morning any time between 9.30 am and 12.00 noon to show your support! 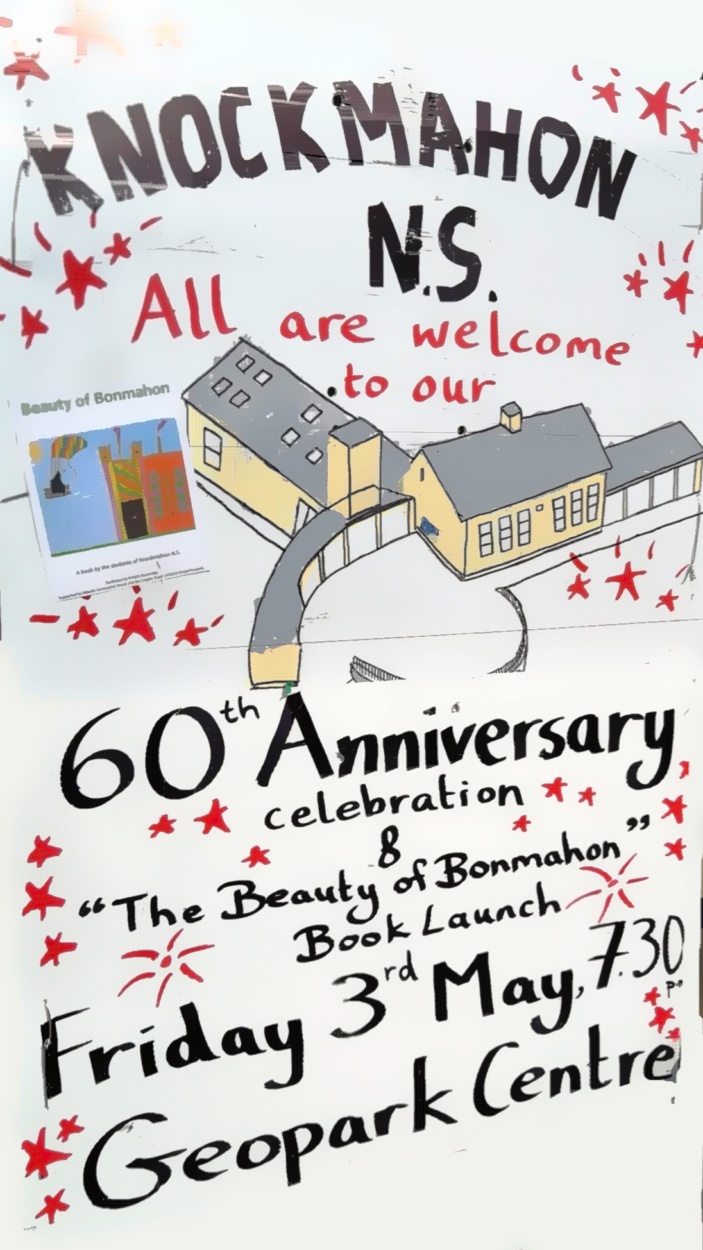 quality education to the community. Their 60th Anniversary celebration & “Beauty of Bonmahon” book launch takes place on Friday, 3rd May from 7.30pm in the Visitor Centre. There will be Ceol agus Craic, Open Mic, light bites, and a raffle. All are welcome. Come and join the celebrations!
The 2019 Copper Coast Festival kicks off with a Bonmahon Tidy Towns fundraising night. Come along on the evening of Friday May 24th to a  “cabaret evening” featuring “Sounds”. More details available from the Tidy Towns committee or on Facebook. 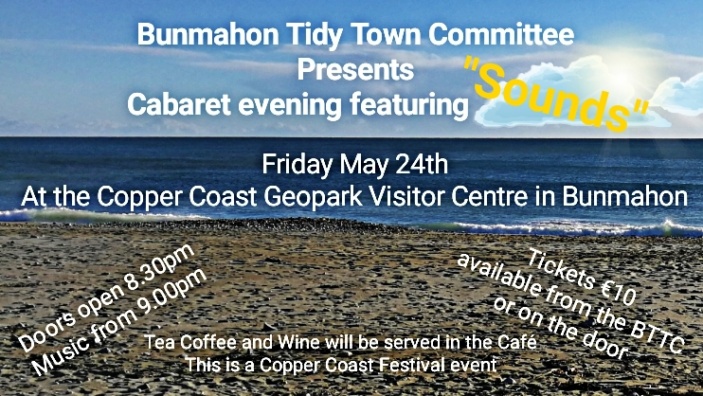 The 2019 Copper Coast Festival will run from May 24th to June 9th. An excellent line up of events will be announced soon!

We are delighted to welcome eight new  Geoparks into the Global Network.

The newly designated sites are:

The Kütralkura UNESCO Global Geopark, which in the language of the Mapuche people means stone (kura) and fire (kütral), or firestone, is characterized by some of the world’s most active volcanism. It is situated 700 km south of Santiago and reaches the border of Argentina to the east. It encompasses the municipalities of Curacautín, Vilcún, Lonquimay, and Melipeuco, settled by their indigenous inhabitants two millennia ago. Its iconic peaks are mostly active volcanoes such as Llaima, Lonquimay, Tolhuaca, and Nevados de Sollipulli, as well as an extinct volcano, the Sierra Nevada. The thick ice masses that once partially covered the territory, have been shrinking for the past 20,000 years.

The UNESCO Global Geopark of Jiuhuashan, which translates to “Nine Glorious Mountains”, is located in the Qingyang County of China’s Anhui province. Four of them are crowned by sacred Buddhist temples, some dating back to the fifth century CE, on their peaks. Beyond their religious, historical and cultural significance, these mountains also provide a major source of the fresh water that feeds the Yangtze River system. Jiuhuashan’s unique and favourable geological conditions have contributed to the flourishing of the region’s biodiversity and cultural traditions. In 2016, the natural landscape of this area and its religious sites attracted 9.9 million visitors, a major economic contribution to local communities.

The Yimengshan UNESCO Global Geopark is located on the eastern coast of China, near Jinan City, the capital of Shandong Province. The site is home to one of Asia’s largest kimberlite-type diamond mines, the first primary diamonds discovered in China. The landscape is dotted with Daigu, castle-shaped land formations, as well as multiple sites of cultural heritage, including the Zhou dynasty Wanshou Palace, the Xialou Pavillion where Confucius is believed to have once visited, the 1,500 year old Marshal tree, the Menglianggu Battle Monument, and several renowned temples.

The Vis Archipelago UNESCO Global Geopark is located off the coast of Croatia, formed by some of the oldest rock in the Adriatic Sea. The northeastern region of the archipelago features large sand deposits formed by fierce winds in the Ice Age, which also created several unique caves and land formations. Before the sudden rise of the sea level around 12,000 years ago, these islands were much larger and extended more than 20 miles. In this extended area, called the Mala Palagruža, archaeologists discovered flint quarries that served for the production of early tools, believed to have been made by the islands’ first inhabitants up to 8,000 years ago. Some of the most famous sites on this Archipelago are the Blue Cave (Modra špilja) and the Monk Seal Cave (Medvidina špilja).

The Imbabura UNESCO Global Geopark is located in the northern inter-Andean region, in the Republic of Ecuador. It is known for its great multitude of lakes and magnificent geological formations, such as the Peguche Waterfalls. The highest summit is of this Geopark, the 4,939 metre high Cotacachi Volcano, is located within the Cotacachi Cayapas Ecological Reserve. The provincial capital, Ibarra, also known as the “White City,” encompasses indigenous villages and colonial towns attracting thousands of visitors every year. This area is currently inhabited by different ethnic groups, among them the Caranqui, the Cayambis, the Otavalos, the Zuletas, the Natabuelas, the Montubio, the Afro and the Awa.

The Trollfjell UNESCO Global Geopark is an area with unique characteristics shaped by a long history of human habitation. While some of this area’s bedrock is poor in nutrients, resulting in barren stretches, others are fertile supporting lush vegetation and considerable biodiversity. Naturally occurring soapstone has been exploited locally since the Iron Age, to make utensils ranging from pots to fishing weights. Archaeologists have discovered soapstone quarries dating back to Viking period, which in the 12th and 13th supplied stones used to build churches. Passages in Trollfjell’s Solsem Cave feature prehistoric rock engravings of dancing stick figures, dating back thousands of years.

The Colca y Volcanes de Andagua UNESCO Global Geopark, in the Southern Peruvian Andes, boasts a vast array of volcanic landscapes, lakes, geological faults, pre-Hispanic ruins and colonial churches. Formed 400 million years ago, the landscape features the great Colca Canyon, one of the largest and deepest in the world. The landscape of the Geopark, one of the few areas in the world with a multitude of volcanic cones, has been carved by rivers of lava and melting glaciers. This majestic scenery is known as Valley of Volcanos Andagua, extending between the Colca Canyon-Ayo, Chachas-Andagua and Orcopampa.  Most of the inhabitants of these territories belong to pre-Hispanic cultures, heirs to rich customs, festivals and dances, many of which connect them to their unique, volcanic-tectonic territory with its hot springs and highly arable soils.

In the northwest region of Spain, the Courel Mountains UNESCO Global Geopark is home to a variety of Galician communities living in what remains of small medieval villages and monasteries. The territory’s deep valleys and canyons have been formed by erosion. The remarkable aspect of its mountains is impacted by mining, reflecting the relationship between humans and the mineral resources of the region’s Paleozoic rocks, which separate the peninsular interior from the Atlantic facade. Between the first and second century CE, the Roman Empire is believed to have operated dozens of gold mines in this region, extracting Paleozoic primary gold associated with the erosion product of gold-bearing quartz dykes and concentration of their deposits. Remnants of pre-historic fauna and flora, as well as Neolithic paintings, can also be found well-preserved within the deep caves of the mountains.

The site comprises coastal cliffs and a headland.

Geological System/Age and Primary Rock Type
The rocks at Dunabrattin Head are all Ordovician in age from about 460 million years ago. Rocks of the Tramore Limestone Formation forms the headland itself.

Most of the headland itself is comprised of rocks of the Tramore Limestone Formation, which is mostly actually composed of calcareous mudstones and siltstones, rather than pure limestone. The rocks here have yielded a collection of fossils, particularly trilobites, for collectors in the 19th century, such as those of the Geological Survey of Ireland. The headland is the type locality for one trilobite species, Illaenus bowmanni. Inland, the rocks pass up into tuffs and mudstones and other sedimentary rocks. They show sedimentary features which indicate that there were earthquakes during the time they were being deposited. There is also a good sea arch eroded in the rocks to the east of the headland

Some car parking is available at Boarstrand harbour which is easily accessible.

Access via the cliff top path is not complete or easy, due to cliff collapses and narrow paths, so general promotion is probably not advisable. Safe access to fossiliferous rocks is very limited and there is very little sea level accessibility, although low tide is essential for some reported access from the Boat Strand Harbour.

A Prehistoric tomb older than the pyramids

Gaulstown Dolmen is one of the finest examples in Ireland of a prehistoric portal tomb known as a Dolmen. Built around 3500 to 4000 BC, Gaulstown is constructed of locally quarried volcanic rock and features a cap stone which is over 5 metres in length.

Discovered by a Geologist

Gaulstown was first recorded by famous 19th century Irish Geologist and artist George Du Noyer who encountered the Dolmen while mapping the rocks of the area.

Gaulstown is only accessible through private property. Please be aware that the paved  entrance to the site is also used by local farms and residences  and as such care must taken with parking adjacent to it. Do not park between the gates and the walled enclosure and be aware of the operation of farm machinery.

The fort on the hill

The name of near by Dunhill is derived from the Irish translation of the “fort of the rock”. The impressive silhouette of the castle which sits on the rock today comprises only about half a fifteenth century tower with bits of outer walls dating to the early thirteenth century.

Seat of the Power Family

The castle had an interesting and chequered history. The la Poer’s (Power) of Dunhill were infamous in the 14th century, as they launched many attacks on Waterford City. In 1345 they destroyed the area around city but were counter-attacked, taken prisoner and hanged. The remaining members of the Power clan join forces with the O’ Driscoll family. This alliance would attack nearby Waterford many times over the next 100 years, with both success and failure. After a defeat in Tramore in 1368 the castle passed to the Powers of Kilmeaden. It remained in their control until the Cromwellian attack on Dunhill and its first capture (legend of gunners and buttermilk) in 1649.

Once regarded as impregnable, the castle was besieged and sacked, with the outer defences destroyed as well as tower beside the church. Fate of last Lord of Dunhill and Kilmeaden, John Power, and his family were unknown. The Castle and lands were then given to Sir John Cole with the church given to Waterford Corporation. Cole and his decedents never lived in the castle and the church was disused, with the result that timbers rotted and both fell into ruins during the 1700’s. More deterioration was recorded in 1912 when the east wall of the castle collapsed during a storm.

The castle is easily accessible via the grass trail leading from the car park at its base. However care must be taken around the ruins as they not fenced or safe for children to play around unattended.

A Path Through Time

The Copper Coast Geological Garden (Geogarden), in Bunmahon, provides visitors with a glimpse into the geology of the Copper Coast. The Time Path in the garden will guide you through geological time with 28 slabs depicting the major steps in Earth history and evolution of life.

The Geogarden is located in the village of Bunmahon and easily accessible. Car parking is available on site and foot access is easy.