Due to COVID-19, no new applications could be evaluated, and the UNESCO Global Geoparks Council was only able to consider candidates from older applications which had been deferred by the Council in 2017-2019. Evaluation missions to these sites had already been carried out before the beginning of the pandemic and the applicants submitted additional reports providing information requested during their previous evaluation by the Council. 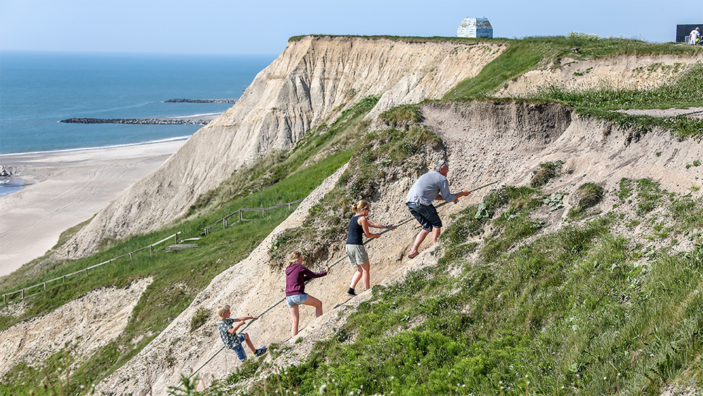 About one third of the Geopark’s surface area is on land, the rest consisting of marine areas in the Limfjord and the North Sea. The terrestrial part of the Geopark’s hilly glacial landscapes with flat outwash plains, lagoons and lakes was formed by successive ice ages, particularly the most recent ice age, the Main Advance, that took place 23,000 to 21,000 years ago. Wind and water have continued to impact the landscape in many highly visible ways. The Geopark comprises 13 Natura 2000 sites and five nature and wildlife reserves encompassing more than 90 geological and natural sites.
https://www.geoparkvestjylland.com/ 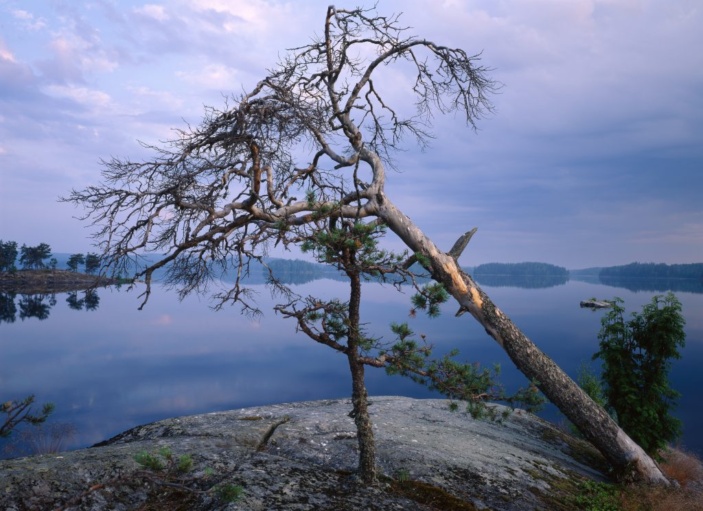 The Geopark takes its name from Lake Saimaa, the largest lake in Finland, and 4th largest lake in Europe. Situated in southeast Finland, south of the Vuoksi water system, the Geopark spans an altitude of about 20 to 180 metres above sea level. One third of its surface area of 6,063 km² is water, dotted with thousands of islands, with a combined shoreline of over 8,000 kilometres. Saimaa’s rock foundation points to the area’s ancient past when it was part of the seabed some 1,900 million years ago. The bedrock was shaped over time as the sea receded, mountain-folding took place, and the stony masses crystallized into gneisses and granites. The ancient bedrock was further impacted by the ice age and land uplift which continues today. The area’s soil was formed over the last 20,000 years as a result of ice sheet erosion. Since then, a number of unique and endangered species, including the Saimaa ringed seal and landlocked salmon, became isolated in the area. Impressive rock paintings on the shores of the lake indicate human presence since the Stone Age. The Geopark’s location and features permit the visitor to observe key types of Finnish Lake District ice lobe formations.
https://www.saimaageopark.fi/ 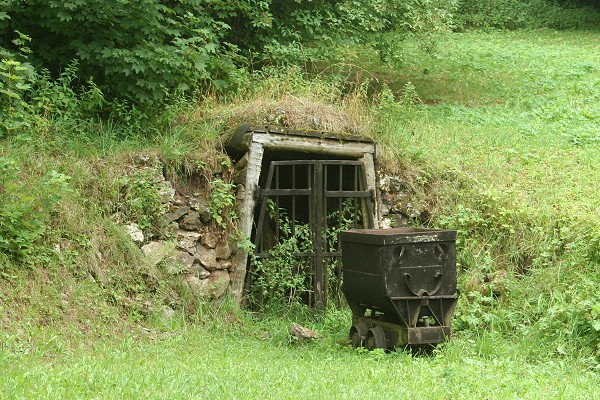 Located in Thuringia, central Germany, the Geopark covers an area of about 988 km² at altitudes ranging from 250 to 900 metres above sea level. Its geology documents over 150 million years of the Earth’s history, from the amalgamation of the supercontinent Pangea until its break-up in the Late Triassic, and it features the only outcrop of the Triassic/Jurassic boundary in central Germany. The Geopark’s extraordinary fossil record has been the subject of research for over 300 years leading to the accumulation of great geological expertise. Its fossil reefs, among the first to be recognized as such in the 19th century, are the remnants of the formation of a small island surrounded by reefs in the Zechstein Sea. Visitors can explore three of the Geopark’s hundred natural caves. Its Geo and Pleasure Trail highlights the connection between the local soils and geology and local culinary traditions over low-lying mountains and areas of loess.
https://www.geopark-thueringen.de/en/ 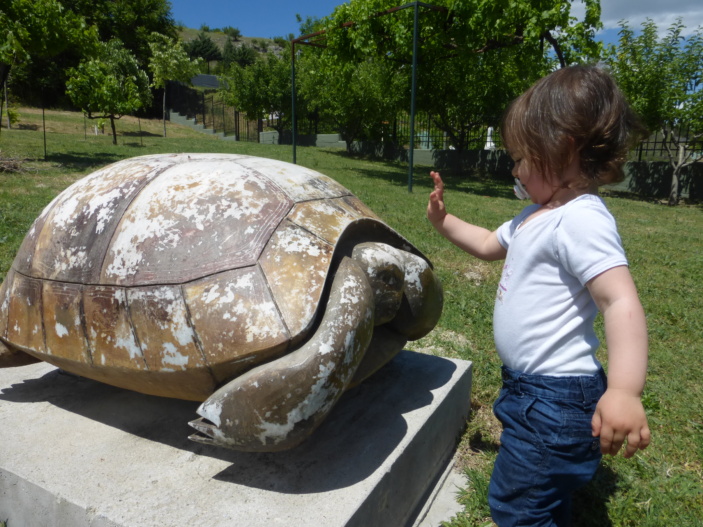 In the north of Greece, in the region of West of Macedonia (within 40 to70 km of the Albanian and North Macedonian borders), the Geopark covers an area of 2,486 km², with altitudes ranging from about 380 to 3,800 metres above sea level. Greece’s longest river, the Aliakamon, flows through it. Its geology comprises rock formations dating back from about one billion years ago to the present documenting several tectonic plate events including the birth of the Tethyan Ocean and the emergence of Europe as a distinct continental mass. Mount Orliakas, a reef that straddles the ancient African-European collision zone is situated in the Geopark. Studies of these geological features contributed significantly to development of the prevailing theory regarding the origin of tectonic plates. The Geopark also features some of the world’s most important proboscidean fossils, the Lands of the Elephants, and the world’s longest known mammoth tusk, over 5 m long.
https://www.geoparkgrevenakozani.com/ 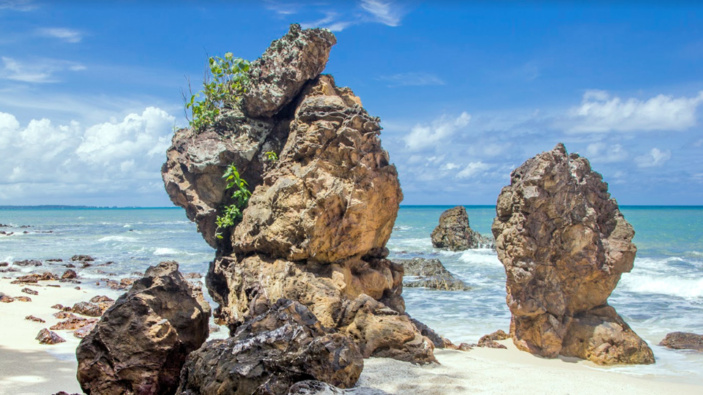 The Geopark is located approximately 400 kilometres to the north of Jakarta and encompasses Belitung Island and over 200 small islands in a marine area of 13,000 km². The marine area represents about two-thirds of the Geopark’s total surface area. Belitong is known for its spectacular Tor granite landscapes, landforms of large, free-standing rock outcrops created by erosion and weathering. It also features rare tektites formed by meteorite impacts known as Satam Stone or Billitonite and unique mineral deposits such as the Nam Salu primary tin deposit, the wealthiest single tin lode in the southeast Asia region. Located on historic maritime trading and migration routes, the Geopark is home to over 288,000 people of diverse cultures including the Sawang Tribe. The main sources of income are agriculture, fishing, and mining.
https://belitonggeopark.net/ 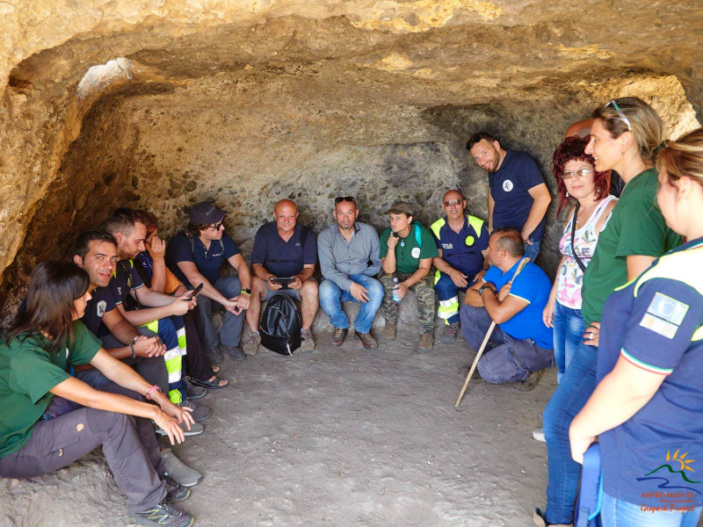 Located in Calabria in the south of Italy, rising from sea level to almost 2,000 meters, the Geopark is home to over 273,000 people. Its peculiar geology is the result of a geodynamic and seismotectonic evolution that started more than 500 million years ago and is still ongoing. The Geopark lies on a peninsular fragment along the Apennine chain, which corresponds to a fragment of the Alpine chain detached from Spain, North-West Italy, Sardinia, and Corsica. A complex of mountains, ridges and plateaus alternates with deep valleys carved by unique natural water streams called fiumare, which have sculpted the hard rock of the crystalline-metamorphic substrate overtime and created spectacular waterfalls. The Geopark’s unique geomorphology allows for a beautiful 360-degree view of the Straits of Messina, Mount Etna, the Aeolian Islands, the Calabrian Greek territories, the territory of Locri, and the Plain of Gioia Tauro.
http://www.parcoaspromonte.gov.it/ 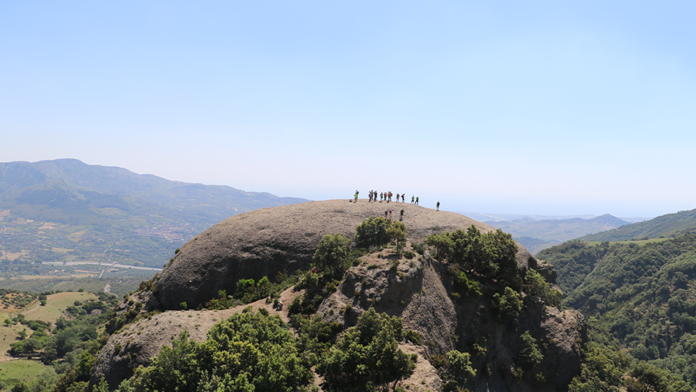 Located in the Central Apennines, the Geopark covers a surface area of 740 km² with an altitudinal range of 130 to 2,800 metres above sea level featuring more than 60 peaks in the Majella Massif, half of them exceeding 2,000 metres, as is the case with Mount Amaro. The Geopark is carved by a series of canyons and comprises many rivers and a few perennial lakes that are essential to supporting wildlife. Exhibiting one of the youngest reliefs of the Apennines, the area is constituted mainly by fossil-bearing limestone. With remnants of human presence going back about 600,000 years, the Geopark contains 95 geosites, including one of the oldest archaeological geosites in Europe. The majority have considerable educational and touristic value. Thanks to its unusual landscape of high reliefs near the sea and geomorphological heterogeneity, the Geopark is characterized by a great variety of microclimates, ecosystems and ecological niches, which has given rise to an exceptional and valuable degree of biodiversity. 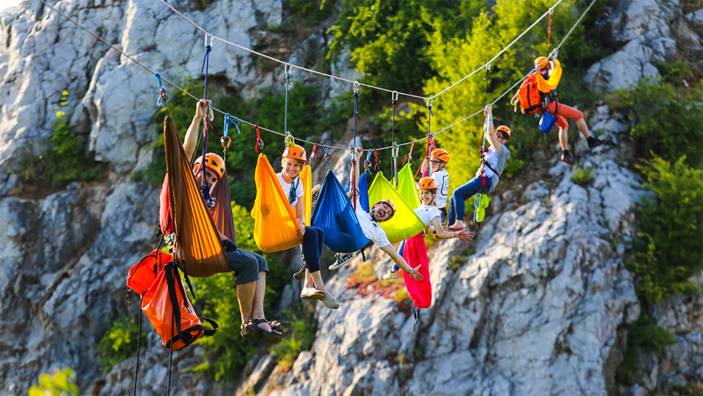 Located in the southeast of Poland, in the western part of the Świętokrzyskie (Holy Cross) Mountains, the Geopark’s altitude ranges from 200 to 400 metres above sea level and is home to more than 252,000 people. The Geopark lies within the Trans-European Suture Zone (TESZ), a major tectonic boundary between the Variscan West-European Platform, Precambrian East-European Platform and orogenic belt of Alpine structures, which are key to understand the geological structure of Europe. More importantly, it is the only area in the TESZ where sedimentary rocks representing the sequence of all geological periods from the Cambrian to the Quaternary are outcropped on the surface. Its geology, combined with centuries of human intervention have resulted in a rich diversity of landscapes, flora and fauna. Traces of human activity in the Geopark dating back 60,000 years, include Neanderthal camps and beautiful cave systems. Many ancient quarries and mines bear testimony to the importance of mineral deposits, metal ore, limestone, and other natural resources for local populations through the ages.
https://www.visitpoland.com/the-holy-cross-mountains-geopark