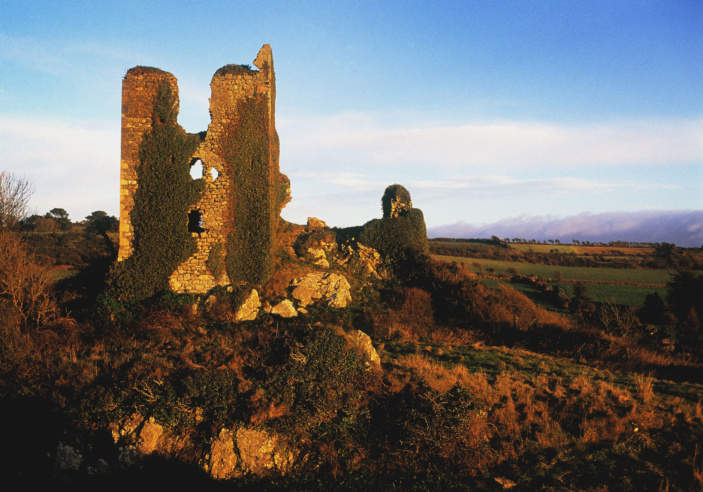 The fort on the hill

The name of near by Dunhill is derived from the Irish translation of the “fort of the rock”. The impressive silhouette of the castle which sits on the rock today comprises only about half a fifteenth century tower with bits of outer walls dating to the early thirteenth century.

Seat of the Power Family

The castle had an interesting and chequered history. The la Poer’s (Power) of Dunhill were infamous in the 14th century, as they launched many attacks on Waterford City. In 1345 they destroyed the area around city but were counter-attacked, taken prisoner and hanged. The remaining members of the Power clan join forces with the O’ Driscoll family. This alliance would attack nearby Waterford many times over the next 100 years, with both success and failure. After a defeat in Tramore in 1368 the castle passed to the Powers of Kilmeaden. It remained in their control until the Cromwellian attack on Dunhill and its first capture (legend of gunners and buttermilk) in 1649.

Once regarded as impregnable, the castle was besieged and sacked, with the outer defences destroyed as well as tower beside the church. Fate of last Lord of Dunhill and Kilmeaden, John Power, and his family were unknown. The Castle and lands were then given to Sir John Cole with the church given to Waterford Corporation. Cole and his decedents never lived in the castle and the church was disused, with the result that timbers rotted and both fell into ruins during the 1700’s. More deterioration was recorded in 1912 when the east wall of the castle collapsed during a storm.

The castle is easily accessible via the grass trail leading from the car park at its base. However care must be taken around the ruins as they not fenced or safe for children to play around unattended.