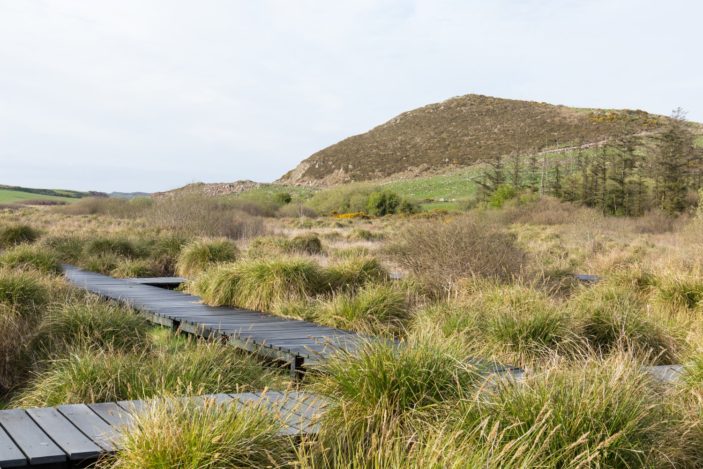 Geological System/Age and Primary Rock Type
The fen itself has been formed in the Holocene (post-glacial) Period, though the hollow and surrounding crags have been moulded by glacial ice during the Quaternary (Ice Age).

Main Geological or Geomorphological Interest
The fen is an area where slightly acidic groundwater seeps out from surrounding land and collects in a bowl-shaped depression, thus forming a marshy mire.  Peat has formed within this hollow from the partial decay of plant remains over the last few millennia.

The fen is just over a kilometre long (north-south) and approx. 200m wide, occupying a hollow scoured out by ice among rock crags during the last Ice Age.

As with many fen features, the flora is somewhat unique in Waterford, although a number of such, similar features do occur in the surrounding area.  Wetland plants abound and unusual species have been recorded here.  The wettest patches are dominated by bogbean (Menyanthes trifoliata), water horsetail (Equisetum fluviatile) and bog pond weed (Potamogeton plygonifolius).

In drier places these species become less common and the dominant species is the moss Aulacomnium palustre, with cotton grass (Eriophorum angustifolium), marsh bedstraw (Galium palustre) and sedge (Carex rostrata) all frequent.  In addition the bog St. John’s Wort (Hypericum elodes) is very common, a local species in Ireland and Britain.   The abundance of St. John’s Wort is one of the more unusual aspects of the fen.

Site Importance
This is a very good example of an acidic fen peat environment, and it is an example of the most recent geological deposit still in the process of forming. The site is of County Geological Site status for its geological importance, but it is a national Nature Reserve and a pNHA (No. 1697).