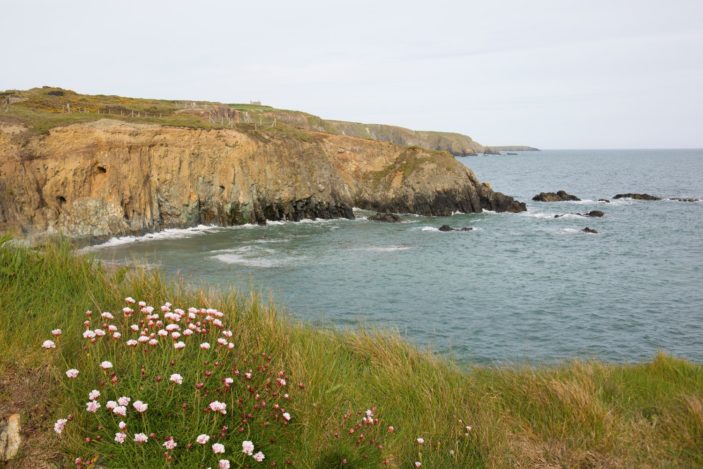 Outline Geosite Description
The site comprises coastal cliffs and the bay at Stage Cove, and Knockmahon beach to the east of it.

Geological System/Age and Primary Rock Type
Ordovician volcanic rocks such as andesite and rhyolite are injected into sediments such as muddy limestone and slate at the site.

Main Geological or Geomorphological Interest
A main feature of interest here is the Pipes of Baidhb – an intrusion of rhyolite, which has cooled with polygonal columns, perpendicular to the surface of the intrusion. It forms an arch in the cliffs and is reminiscent of the Giant’s Causeway, although it is much older. However, weathering is causing the columns to collapse and it is an ever changing feature through the years.

There are also andesite intrusions running through the sedimentary rocks, and andesite tuffs interbedded with the shales.

At Knockmahon, and in Stage Cove especially, there are numerous mine shafts on the cliff top and adits into the cliffs that reflect the mineralised veins, which run northwest-southeast through this site. One mineralised fault in particular is eroded out as a gully. Stage Cove has a slipway, which was used in shipping copper ore out, and also has remains of a Copper Yard with a cobbled floor.

Limited parking available at stage cove and easy access to this part of the site is possible.

Access to Knockmahon Strand however is not easy and descending the gully is not recommended. A grassy path down to beach level is found to the east of the gully. Loose rock fragments do fall down here, certainly on a windy day, and rockfalls, such as at the columnar jointed intrusions, are apparent from the debris at beach level, so caution must be exercised.

Please Note: The mine shafts and adits also require significant care, and should not be entered under any circumstances!